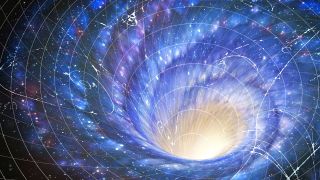 For most of human history, the world didn’t change very quickly. Until the 1700s, kids could largely expect their lives to be similar to their parents, and that their children would have an experience very similar to their own, too. There were obviously changes in how humans lived over longer stretches of time, but nothing that even different generations could easily observe.

Luc Besson on the future

My first introduction to science fiction was Valérian and Laureline. I was ten years old. Every Wednesday there was a magazine called Pilote in France, and there was two pages of Valerian every week. It was the first time I’d seen a girl and a guy in space, agents travelling in time and space. That was amazing.

The past is written. The present? We have to deal with it. But the future is a white page. So I don’t understand why people on this white page are putting all this darkness.

The industrial revolution changed all of this. For the first time in human history, the pace of technological change was visible within a human lifespan.

It is not a coincidence that it was only after science and technological change became a normal part of the human experience, that time travel became something we dreamed of.

Time travel is actually somewhat unique in science fiction. Many core concepts have their origins earlier in history.

The historical roots of the concept of a ‘robot’ can be seen in Jewish folklore for example: Golems were anthropomorphic beings sculpted from clay. In Greek mythology, characters would travel to other worlds, and it’s no coincidence that The Matrix features a character called Persephone. But time travel is different.

The first real work to envisage travelling in time was The Time Machine by HG Wells, which was published in 1895.

The book tells the story of a scientist who builds a machine that will take him to the year 802,701 – a world in which ape-like Morlocks are evolutionary descendants of humanity, and have regressed to a primitive lifestyle.

The book was a product of its time – both in terms of the science played upon (Charles Darwin had only published Origin of the Species 35 years earlier), and the racist attitudes: it is speculated that the Morlocks were inspired by the Morlachs, a real ethnic group in the Balkans who were often characterised as “primitive”.

But of course, this was science fiction – what about science fact? The two have always been closely linked, and during the early days it was no different. In 1907, the physicist Hermann Minkowski first argued that Einstein’s Special Relativity could be expressed in geometric terms as a fourth dimension (to add to our known three) – which is exactly how Wells visualised time travel in his work of fiction.

The development of Special and then General Relativity was significant as it provided the theoretical backbone for how time travel could be conceived in scientific terms. In 1949 Kurt Gödel took Einstein’s work and came up with a solution which as a mathematical necessity included what he called “closed timelike curves” – the idea that if you travel far enough, time will loop back around (like how if you keep flying East, you’ll eventually end up back where you started).

In other words, using what became known as the Gödel Metric, it is theoretically possible to travel between any one point in time and space and any other.

There was just one problem: for Gödel’s theory to be right, the universe would have to be spinning – and scientists don’t believe that it is. So while the maths might make sense, Gödel’s universe does not appear to be the one we’re actually living in. Though he never gave up hope that he might be right: Apparently even on this deathbed, he would ask if anyone has found evidence of a spinning universe. And if he does ever turn out to be right, it means that time travel can happen, and is actually fairly straightforward (well, as far as physics goes anyway).

Since Gödel, scientists have continued to hypothesise about time travel, with perhaps the best known example being tachyons – or particles that move faster than the speed of light (therefore, effectively travelling in time). So far, despite one false alarm at CERN in 2011, there is no evidence that they actually exist.

Of course, the lack of real science when it comes to time travel has not stopped some people from claiming to have done it. With the likes of Marty McFly and Doctor Who on the brain, chancers and hoaxers have realised that time travel is immediately a compelling prospect. Here’s a couple of amusing examples.

At the turn of the millennium, when the internet was still in its infancy, forums were captivated by the story of John Titor. Titor claimed he was from the year 2036, and had been sent back in time by the government to obtain an IBM 5100 computer. The thinking appeared to be that by obtaining the computer, the government could find a solution to the UNIX 2038 bug – in which clocks could be reset, Millennium Bug-style, leading to chaos everywhere.

Posting on the ‘Time Travel Institute’ forums, Titor went into details on how his time machine worked:  It was powered by “two top-spin, dual positive singularities”, and used an X-ray venting system. He also gave a potted history of what humanity could expect: A new American civil war in 2004, and World War III in 2015. He also claimed the “many worlds” interpretation of quantum physics was true, hence why he wasn’t violating the so-called “grandfather paradox”.

Okay, so he probably wasn’t a real time traveller, but in the early days of the internet, when anonymity was more commonplace, he truly captured the imaginations of nerdy early adopters who perhaps, just a little bit, hoped that he might be the real thing.

More recently, in 2013, an Iranian scientist named Ali Razeghi claimed to have invented a time machine of sorts. It was supposedly capable of predicting the next 5-8 years for an individual, with up to 98% accuracy. According to The Telegraph, Razeghi said the invention fits into the size of a standard PC case and “It will not take you into the future, it will bring the future to you”. The idea is that the Iranian government could use it to predict future security threats and military confrontations. So perhaps it is time to check in and see if he managed to predict Donald Trump?

So is this the best we can do? Will we ever manage to crack time travel? Some scientists are still sceptical that it could ever be possible. This includes Stephen Hawking, who proposed the ‘Chronology Protection Conjecture’ – which is what it sounds like. Essentially, he argues that the laws of physics are as they are to specifically make time travel impossible – on all but “submicroscopic” scales. Essentially, this is to protect how causality works, as if we are suddenly allowed to travel back and kill our grandfathers, it would create massive time paradoxes.

Hawking revealed to Ars Technica in 2012 how he had held a party for time travellers, but only sent out invitations after the date it was held. So did the party support his argument that time travel is impossible? Or did he end up spending the evening in the company of John Titor and Doctor Who?

“I sat there a long time, but no one came”, he said, much to our disappointment.

Huge thanks to Stephen Jorgenson-Murray for walking us through some of the more brain-mangling science for this article.